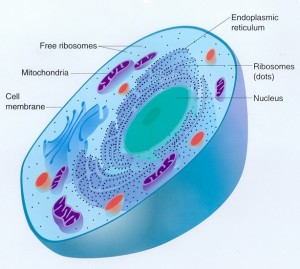 This will be divided into two parts. The first part will talk about basic biology and what cells are overall.  The second part will talk about the difference between Embryonic Stem Cells and Adult Stem Cells.  Both are important and should be well understood.  The word of the day for this post is Mitosis. Learn and understand it.

The world goes round and round and the talk of stem cells and their potential benefit are almost a daily occurrence. But it is surprising to learn that many people have no clue at what they really are. These two words have come to symbolize an entire half generation of argument, budgeting, and political polices. So, it’s about time to learn about them.

A cell is the basic unit of the body. A cell is a simple structure that when combined with hundreds of thousands and many more, you can build tissues, bones, organs, and much more. Each type of tissue or bone has their own unique cell.  There is a structural difference between a cell taken from your muscle and another taken from your liver.

Humans have different cells than plants, bacteria, and even animals. The cell was discovered in 1665 by Robert Hook.  There are two general types of cells – Prokaryotic and Eukaryotic

Prokaryotics are found in bacteria and archaea (a group of microorganisms)

Eukaryotics are found in Animals, Fungi, Plants, and Protists

For today’s discussion we will look mostly at Eukaryotic Cells

The most important aspect of this type of cell is the Cell Nucleus.  But in addition, there are other things that are different between cells.  This includes Plasma membrane, Chromosomes, Mitochondria, Lysomes, Ribosomes, Golgi Vesicles, and much much more.  If you don’t know what these are….that is perfectly okay.

Take home message…cells aren’t really that simple.  But, in this complex situation, simplicity just means that many cells are used together to make a larger tissue or organ.  They are the building blocks if you will.

You could take entire biology courses to break down a cell and look at each of the above mentioned organelles and functionality of the cells.  But the key is to understand that the number of Cell Nucleus or Lysomes, or other functions can be different between cells.  Again, this points back to the bone cell vs the muscle cell and again with the liver cell.  They are different and now, hopefully, you can imagine some differences.

Mitosis is the key word here.

Inside the cell nucleus of each cell is DNA.  The cell goes through a sort of cycle for mitosis.

The next portion will look and attempt to  generally described and explain the mitosis cycle:

1.)   The DNA is pulled apart and straightened.

2.)   The DNA is copied and soon x2 DNA strands are inside the cell.

3.)    Lastly the 2 strands are separated and two exactly similar cells are now the result.  One was the old cell and the other is the new cell.

This process of Mitosis is extremely complicated and has been well studied.

The key to this process is that a liver cell cannot become a bone cell.  It just can’t be done!!!   Well….at least for the most part.

Be sure to check out Part Two.